I have attached a Times article (1 April 2016): Lawyers press NHS to ditch “kangaroo court” disciplinary process for your information.

This relates to a case which you must be aware of. Amin Abdullah was a prize-winning nurse, a model of professionalism. He committed suicide by self-immolation after being dragged through an unpleasant disciplinary procedure at his Trust. His crime was exercising his legitimate right to speak up on behalf of a colleague. His treatment and suicide are to be seen in the context of this government’s commitment to Learning not Blaming.

Mr Abdullah’s death is reminiscent of Jeremy Hunt’s words to the House of Commons on 11 February 2015 following the launch of the Sir Robert Francis’s Freedom to Speak Up Report:

He (Sir Robert) said he heard again and again of horrific stories of people’s lives being destroyed—people losing their jobs, being financially ruined, being brought to the brink of suicide and with family lives shattered.

Amina Abdullah suffered all these except of course that he did not stop at the brink of suicide.

The Health Committee is well acquainted with the problems staff who raise concerns encounter when they face disciplinary procedures.

In September 2013 in your report After Francis; making a difference, in section 3: Raising concerns and resolving disputes:

The Health Committee clearly understands the conflict of interest in allowing Trusts to be judge and jury over staff who they want to dismiss.

In the Times article Aprita Dutt speaks of “the vindictive behaviour of NHS managers in disciplinary cases.” That is something many of us reported to Sir Robert Francis in his review.

Following the publication of Complaints and raising concerns in January 2015 you, Dr Wollaston, were widely reported in the media as referring to the mistreatment of whistleblowers as a stain on the reputation of the NHS.

At the heart of this mistreatment, openly described by Sir Robert in his report as victimisation, is of course NHS disciplinary procedure.

This is the mechanism by which NHS Trusts dismiss whistleblowers, usually for SOSR. It is the instrument which is used by managers to rob whistleblowers not only of their jobs but often also of their careers; their physical and mental health, their ability to provide financially for their families.  In short it is an instrument of torture often used to bring pain and ruin on good staff, to stifle concerns and to keep staff silent. This is why an inquiry into NHS disciplinary procedures is long overdue.

I ask the Health Committee to support John Hendy and Paul Gilroy’s call for a full independent judicial inquiry and to make representations to the Secretary of State for the same. In view of his recent statements you may find Mr Hunt receptive to a suggestion for an inquiry. He already recognises that there is in some organisations a problem with independence.

On 9 March in a statement to the House of Commons he said:

“NHS Improvement will ask for a commitment to openness and learning to be reflected in all trust disciplinary procedures and ask all trusts   to publish a Charter for Openness and Transparency so staff can have clear expectations of how they will be treated if they report clinical errors.”

This was a reiteration of what Mr Hunt told the Global Patient Safety Summit a few days earlier. Sadly, asking those Trusts who currently misuse disciplinary proceedings to publish a “Charter for Openness and Transparency” is likely to be ineffective. What is needed is evidence of the way Trusts have in the past used the disciplinary procedure to dismiss good staff. When this analysed will provide the basis for a set of recommendations which will enable reform.

Mr Hunt ended his speech to the Global Patient Safety Summit with a wellknown quotation from Karl Popper:

“True ignorance is not the absence of knowledge but the refusal to acquire it.”

The knowledge needed to reform NHS disciplinary procedures and “create a model which complies with fair trial requirements” is easily at hand.

I have copied in Professor Kapur who organised the protest over Amin Abdullah’s death. I have also copied the lawyers named in this article and my own MP (for information only at present) Mr Andrew Mitchell. 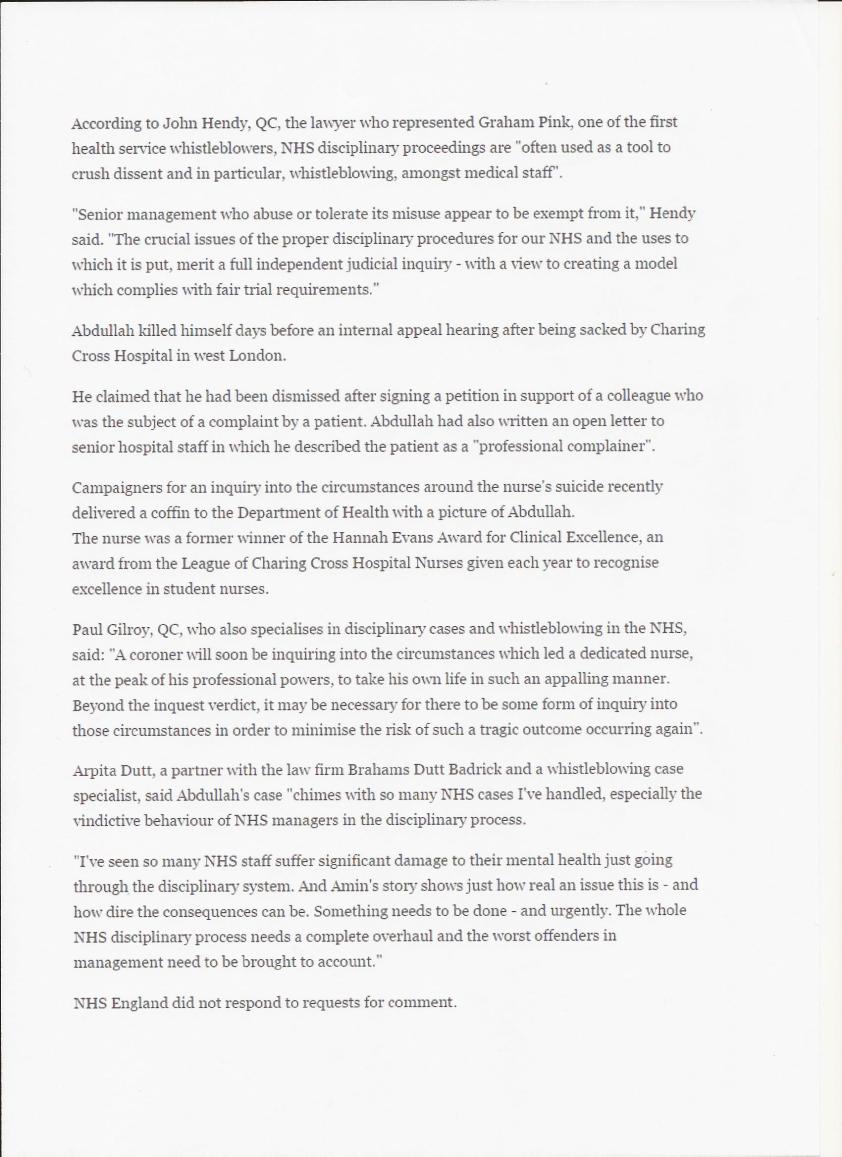 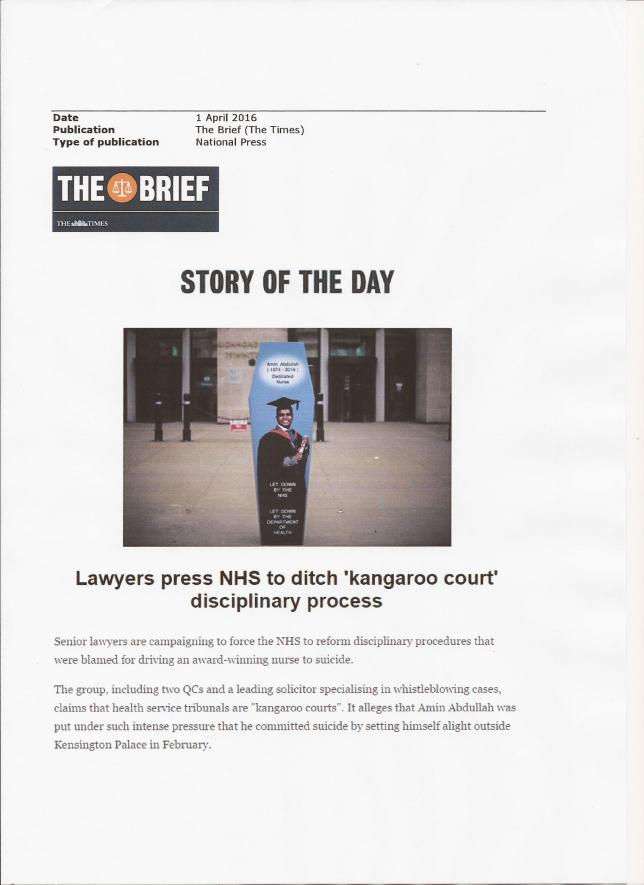 One thought on “An open letter to the Health Select Committee from @NHSWhistleblowr supporting recent calls for a full independent judicial inquiry into the current inhuman NHS internal disciplinary procedures.”