Although healthcare workers have a responsibility to raise concerns about patient safety and unethical or illegal conduct, if they do so they are often treated badly. 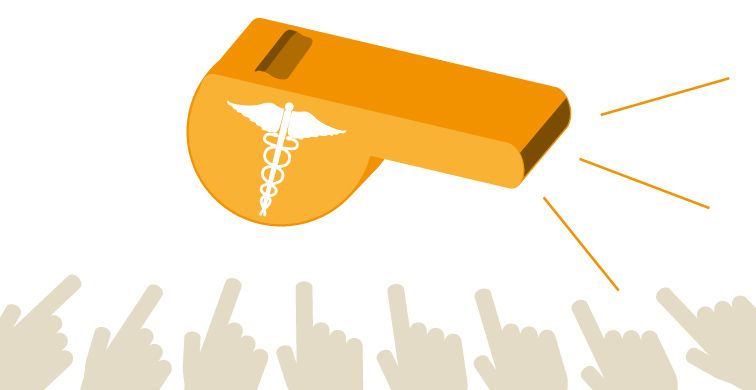 Healthcare workers have a responsibility to raise concerns about patient safety and unethical or illegal conduct. Yet those who raise serious concerns are often treated badly by senior colleagues, their employing organisations and the bodies that should protect whistleblowers. This paradox is because whistleblowers raise concerns that, if made public, would embarrass the organisation or senior and powerful individuals, who are considered less dispensable than the whistleblower. Repeatedly we hear of scandals in healthcare, where whistleblowers were ignored or lost their jobs for raising concerns, but those responsible for both the scandal and its cover-up are promoted to more senior positions in the UK National Health Service.

Through membership of Patients First (patientsfirst.org.uk) I have met many genuine whistleblowers, who raised serious concerns about patient safety and suffered detrimental treatment and lost their jobs. Achieving a just outcome for whistleblowers in such cases is usually impossible because of inequality of arms—unemployed whistleblowers with limited financial resources fight protracted litigation against employers that spend large amounts of taxpayers’ money on legal costs to conceal patient harm or to protect senior individuals.

I say “genuine whistleblowers”, because I recognise that there are some individuals who claim to be whistleblowers only after allegations were raised about their own conduct. However the converse is more frequently the case: after whistleblowers raise concerns spurious reasons are found to discipline or dismiss them. If one looks hard enough one can find a mistake that can be magnified to make a case to dismiss a whistleblower and claim that their sacking was unrelated to them raising concerns. I know of cases where NHS Trusts have employed private detectives to follow a whistleblower, have secretly searched a whistleblower’s office during a weekend, got the hospital IT department to give them access to the whistleblower’s work computer when the whistleblower was on annual leave, and audited a whistleblower’s mileage travel claim in order to allege that a minor disparity in mileage claimed amounted to an attempt to defraud the Trust. Whistleblowers are distrusted, because someone willing to expose concerns about safety or misconduct by a colleague, cannot be trusted to remain silent when a cover-up “is required” for the sake of the organisation or out of comradeship. Other NHS organisations will not employ people who management do not consider team players, because they do not comply with the Mafia-style “code of omerta”. The people who understand this best are appointed to sit on regulatory bodies. As a result, those who raise concerns are also often treated badly by regulators, such as the UK’s General Medical Council (GMC).

The GMC instructs doctors that they must speak up if they have concerns about another doctor’s competence or integrity, but also has a disparagement rule that is used to prevent doctors expressing such concerns. I chaired a national committee and the committee became concerned about the integrity of a research publication. On behalf of the committee, I alleged research misconduct by the authors. The GMC chose to investigate whether I had disparaged the doctors. After months of investigation I was exonerated, but the GMC only reluctantly investigated the allegations I raised and found them true.

I have reported a number of doctors to the GMC. My complaints have resulted in some being removed from the medical register and others received lesser sanctions or “advice about future conduct”. I know that the GMC makes it difficult to complain. The GMC’s initial response is almost invariably that they will not consider the case. A complainant needs to know that they then need to get into a legal argument with the GMC to point out the flaws in its decision. I have gone through this process in cases when the GMC initially said that there was no case to answer, but eventually removed the doctors from the medical register. If the GMC reconsiders the case, the complainant must provide all the evidence: in one case I had to provide more than 32,000 pages of documents, which was onerous. The GMC also threatened me, the complainant, with a High Court action.

To understand the machinations and conflicts of interest that exist at the GMC, it may help to consider a case that I reported. Cardiologist Dr. Clive Handler was suspended from the Medical Register for embezzling money from a charitable research fund after I reported him to the GMC (Wilmshurst 2007). The medical director and Trust Board of the hospital where he worked agreed a settlement with him provided he left quietly. It included the Trust agreeing a payment to Handler and agreeing to conceal his fraud from both the police and the GMC. The remarkable thing was that the medical director who drew up the agreement was Professor Peter Richards, who was a senior member of the GMC. Richards was Chair of the Professional Conduct Committee—the GMC’s disciplinary body. He scheduled himself to chair Handler’s hearing. He had to stand down on the morning of the hearing when the GMC’s own lawyers objected because of his conflict of interest. The GMC refused to act against Richards for concealing Handler’s misconduct and let him return to chairing disciplinary hearing after the case. Would a judge who concealed criminal conduct be allowed to remain on the bench?

A whistleblower may also have to deal with defamation claims. They are very difficult to defend in the United Kingdom. In 1982, when I refused a bribe from Sterling- Winthrop to falsify research findings with their drug, amrinone, I was threatened with legal action (Wilmshurst 2007). I published data to show that amrinone was ineffective and unsafe. In 1984, Sterling- Winthrop told the United States Food and Drug Administration that there were so many life-threatening side effects with the drug that they had ceased to research or market it. In 1986, I discovered that Sterling- Winthrop were selling amrinone over the counter in parts of Africa and Asia, though it was considered too dangerous to have on a doctor’s prescription in Europe and North America. I worked with Oxfam to get proof, which was taken to the World Health Organization. Sterling-Winthrop was finally embarrassed into withdrawing amrinone worldwide.

In 2007, when I was co-principal investigator in the MIST Trial, I expressed concern at a scientific meeting that the trial data presented was inaccurate and incomplete. The sponsor of the trial, NMT Medical, which made the medical device used in the trial, sued me for libel and slander (Wilmshurst 2012). I stuck to my claims, and they sued me three more times. The claims lasted nearly four years and my legal costs exceeded £300,000. The claims ended when NMT went into liquidation (Wilmshurst 2012). I got Circulation to correct a scientific paper containing false data and a new version of the paper was published (Dowson 2008). I had refused to be a co-author, but the other co-principal investigator in the MIST Trial was first author, and he was suspended from the Medical Register for dishonesty (Dyer 2015). To get that outcome took six years of effort on my part.

I have received threats of legal action from a number of doctors that I reported to the GMC, but all withdrew their threats when told what evidence I would present in court. I was threatened with legal action twice by King’s College London when I exposed the cover-up of the misconduct of surgeon, A K Banerjee (Wilmshurst 2016). He was suspended from the Medical Register for a year in 2000 for research fraud after I reported him first. He got back onto the register for three weeks and I told the GMC that they had failed to deal with his financial misconduct and poor clinical skills. He was struck off the register, but he was allowed back on in 2008. He was awarded an MBE “for services to patient safety” in 2014. I raised objections with MPs and the Cabinet Office and the award was forfeited two months later. It is pertinent that when the Health Honours Committee decides to award a national honour to a doctor, they check with the GMC to see whether there is any reason why the honour should not be awarded. That did not work in the case of Banerjee.

And on it goes

The low esteem of NHS management for whistleblowers was brought home to me personally when I applied for a Gold Clinical Excellence Award at the time of renewal of my Silver Award (Clinical Excellence Awards are presented to consultants working in the NHS who perform over and above their role; the higher awards —silver and up—are decided on a national basis). I was not given a Gold, but soon afterwards received an anonymous message that my application had not been dealt with fairly. I appealed, and during the long process discovered that my regional sub-committee had been allowed to nominate four applicants for Gold Awards. My application had the third highest score, but the sub-committee nominated the doctor with the fifth highest score in my place. During the appeals process the Advisory Committee on Clinical Excellence Awards (ACCEA ) disclosed documents. I discovered that ACCEA asked the medical vice-chair of the regional sub-committee to explain why I had not been nominated despite my score. She made a series of false statements about me, and said that the committee felt that exposing research fraud was not a valid contribution. The doctor with the fifth highest score, who the regional sub-committee preferred, was a consultant gynaecologist who was allowed to continue to practise after being placed on the Sex Offenders Register for accessing child pornography. The appeal panel stated that the comments of the regional vice-chair about me and my application were “completely untrue” and upheld my appeal, but ACCEA did not give me a Gold Award. The medical vice-chair whose statements about me were found to be “completely untrue” was appointed to be a medical member of the General Medical Council (GMC). From this I inferred that many senior people in the NHS prefer a convicted paedophile to a whistleblower.

But perhaps NHS whistleblowers should not complain. I have investigated research misconduct in other countries. In one, four whistleblowers said that they had received death threats for exposing research misconduct by a well connected doctor. My experiences lead me to believe that in healthcare those who raise concerns are often treated far worse than the dishonest people they expose.

Described in Private Eye as the godfather of NHS whistleblowers, Peter Wilmshurst is a member of the Committee on Publication Ethics, of Patients First and of Health Watch. He was awarded the Health Watch Annual Award in 2003 “for courage in challenging misconduct in medical research”, and was the first recipient of the BMJ Editor’s Award in 2012 “ for persistence and courage in speaking truth to power”.

Wilmshurst P (2016) Poor governance in the award of honours and degrees in British medicine: an extreme example of a systemic problem. BMJ, 352: h6952.

2 thoughts on “Whistleblowing in healthcare”