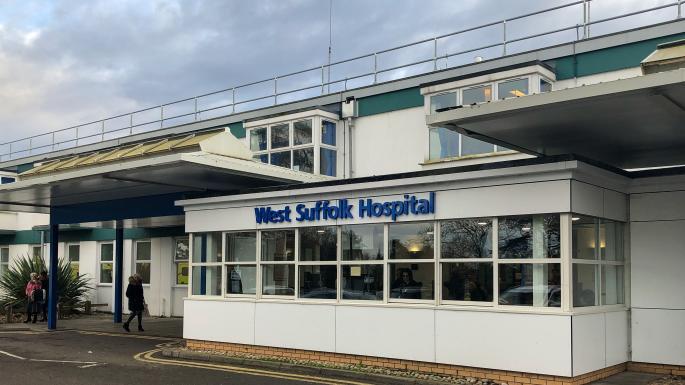 The health secretary has promised an independent review into the treatment of whistleblowers at a hospital where bosses were accused of carrying out a “witch-hunt” against their own doctors.

Staff at West Suffolk Hospital in Bury St Edmunds, next to Matt Hancock’s constituency, were asked to provide fingerprints and handwriting examples in an attempt to find who wrote an anonymous letter to a widower claiming that there had been failures that caused the death of his wife.

Mr Hancock said yesterday that he was a strong advocate of whistleblowers having their voices heard. “In these sorts of complex cases, an independent review, with maximum transparency, is the right way forward,” he said.

As the MP for Suffolk West, Mr Hancock has recused himself from the investigation, which will be overseen by Ed Argar, a junior health minister.

Sue Warby, 57, a mother of two, was admitted to the hospital when she collapsed at home in July 2018. Her cause of death was listed as multi-organ failure after complications.

Her family then received an anonymous letter in October 2018 highlighting errors in her surgery. An inquest began on Thursday and was adjourned yesterday for an independent expert witness to review her medical records and prepare a report.

Speaking at the inquest her widower, Jon Warby, said that he was “surprised about the lengths” the hospital went to to track down the whistleblower.

Mr Warby said that he was “knocked sideways” after an anonymous letter to him highlighted problems with her treatment. He said that staff “should feel able to speak out on any issues they identify in the workplace”.

The letter was posted to his home in Bury St Edmunds in October 2018, prompting the hospital and Suffolk police to begin an investigation.

Doctors were asked for handwriting samples and fingerprints in a move described as chilling by patient safety campaigners. The hospital said that an investigation into the care that Mrs Warby received was already under way.

Mr Warby, a retired police officer, said: “I was quite surprised the lengths they went to but that was also part of a criminal investigation. I can understand that aspect of it to a degree because the allegations involved in the letter could involve a criminal case.”

In a statement read to the inquest on Wednesday, Mr Warby said he was told at the hospital that his wife was incorrectly given glucose instead of saline.

“I asked what the effect of this could be and the consultant told me brain damage or death,” he said. He added that he was later told there was “no new irreversible brain damage”.

Nigel Parsley, Suffolk’s senior coroner, said yesterday the family acknowledged that her death was the “progression of a naturally occurring disease”. They wanted to know if “errors may have had a contributory effect”.

Lawyers for the family said that their “central concerns” would probably not be answered by the evidence heard so far in the case. The family had asked that an expert witness be appointed to review Mrs Warby’s medical records and compile a report, which Mr Parsley decided was “not unreasonable”. He said: “I will request that the witness does this as expediently as possible.”

An expert could provide an opinion on “what, if any” effect errors in Mrs Warby’s treatment had on her, he said.

Mr Warby said that he was notified rapidly of errors in his wife’s care under the hospital’s duty of candour obligations. He said, however, that “we were left wanting answers” after she died.

“I wanted to know what action would be taken to prevent similar incidents from happening again,” he said. “Questions remain about whether Sue could have survived if these errors had not been made. The one positive to come out of all this is the changes put in place to protect future patients.”

The West Suffolk NHS Foundation Trust said in a statement: “A serious data breach took place where confidential patient information was shared inappropriately. We opened an investigation into that data breach, as is our duty. We have apologised to our staff. We have no intention of pursuing fingerprint requests further.”