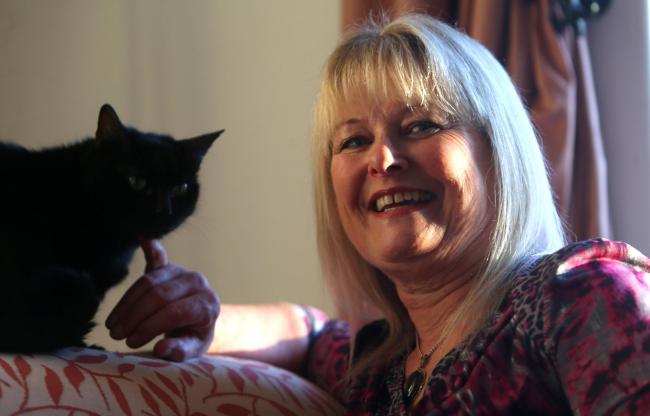 Dr Sheena Pinion at her home in Kirkcaldy
A DOCTOR who claims she was bullied out of her job for whistleblowing has spoken of her despair that she “will never work again” in NHS Scotland, despite winning her unfair dismissal case.

Dr Sheena Pinion, 60, said she believes she has been “blacklisted” since taking NHS Fife to an employment tribunal and has now abandoned hopes of returning to frontline hospital care.

Dr Pinion, who specialises in gynaecological cancers, said she wanted to speak out about her own experience ahead of a preliminary report by QC John Sturrock into claims of a “bullying culture” at NHS Highland, which is expected in mid-February.

Dr Pinion said: “I’ve been watching what’s happening in NHS Highland with great interest. The problem is no one dares speak out because what happens is they then get attacked more.”

She added: “I’m not the only one this has happened to. They keep you isolated. You’re not allowed to contact anyone. People were told not to contact me. My whole life was destroyed.

“I was a single female with no children, work was my whole life. And they took all that away from me. And that’s happening to people all over. I just hope the report into NHS Highland isn’t a whitewash – that’s my fear.

“I’m basically at the end of the road with everything and I know I can never work again. I’ve got nothing to lose.”

Dr Pinion, who lives in Kirkcaldy, qualified in Edinburgh in 1981 and began working as a senior consultant in NHS Fife in 1994.

For the first 10 years it was a “great place to work”, but she believes she became a target for senior managers after voicing concerns about patient safety following a reorganisation of surgical services.

In 2004, she was signed off sick with stress amid an investigation into claims – eventually quashed as false – that she was a bully.

Shortly afterwards, she put in an official complaint after her then line manager refused to engage with her to draw up a job plan, which was necessary for her to renew her contract, return from sick leave and receive back pay.

When she lodged an official complaint, she says she became the victim of a witch-hunt by senior directors who “made my life absolute hell”.

In 2005, she was forced out on gardening leave pending an investigation into allegations that she was putting patients at risk, but again these claims were dropped and a disciplinary panel also found that her manager had “mishandled” her return from sick leave.

Dr Pinion eventually returned to work at NHS Fife in June 2006, but her ordeal was to begin again in 2008 when a colleague – known only as Dr X – revealed that he had contracted a blood-borne virus, later found to be HIV.

NHS Fife subsequently recalled a number of patients Dr X had operated on to test them for the infection. Although the results were negative, Dr X was told to stop carrying out procedures which could put patients at risk of exposure.

In 2010, Dr Pinion made a formal ‘protected disclosure’ to NHS Fife that Dr X was still carrying out operations that potentially endangered patients to the virus. She said this was leaked to Dr X within 24 hours.

“The attacks started immediately,” she said. “Disciplinary actions were raised against me for absolutely anything. Dr X even kept a diary on me, and anytime he heard anyone say anything about me he would escalate it into a disciplinary procedure. Even the most trivial things.”

In January 2012, she also raised concerns over the safety implications of moving obstetrics and gynaecology to the new wing of the Victoria Hospital, without a colposcopy service – a diagnostic procedure to check the cervix for cancer. On January 20, she was suspended “without warning”.

She was just 53, but it was the last time she would work in the NHS.

The reasons for her suspension included claims she had spoken over a colleague during a video conference and breached the dress code by wearing a white coat for clinical care, as well as fresh allegations that she herself was a bully.

The internal probe and Dr Pinion’s subsequent appeal against its findings dragged on for four years, during when time she continued to be paid her full salary – amounting to a total of more than £500,000. In December 2015, she was dismissed.

A subsequent employment tribunal eventually ruled in 2017 that claims of “gross misconduct” were unfounded and that NHS Fife had unfairly dismissed her. NHS Fife spent £160,000 fighting the case.

However, while the tribunal recognised that she was a whistleblower, both in relation to the colposcopy service and Dr X, it rejected her claim that she had been sacked directly because of her whistleblowing.

Dr Pinion received damages of £65,000, but was liable for well over £100,000 in legal fees: she was not covered by insurance, and successful claimants in employment tribunals are not entitled to claim for their legal costs.

As a result, she said she could not afford to appeal the findings in relation to whistleblowing.

Instead, she focused on returning to work – but more than 18 months on has given up.

Doctors require regular revalidation by the General Medical Council. To be revalidated, they have to have a ‘responsible officer’ to vouch for them and provide an appraisal, which means they also need to be employed.

Official guidance states that doctors should rarely be suspended more than four weeks, but that they should at least be provided with a mentor and allowed to keep up-to-date through meetings and training.

Dr Pinion said this did not happen.

“As soon as I was dismissed in 2015, I had no responsible officer to tell the GMC whether I was fit to revalidate or not.

“I came under a new system where basically I would have to do everything on my own: find a job, do the job, pay for an appraisal, pay to submit it to the GMC for revalidation.

“With an employment tribunal looming amid claims that I was basically a ‘nasty, horrible person’, who in their right minds would have given me a job?”

After winning her unfair dismissal case, Dr Pinion set her sights on revalidating by offering to work for free in colposcopy in another Scottish health board, outside of Fife. However, she said the health board’s HR team “dragged out” the process.

She said: “They delayed and delayed and made things really difficult. They were going to do all sorts of things like test me for blood-borne viruses, even though all I wanted to do was sit in on a clinic – not even touch a patient.

“The hoops I was having to go through with their HR was unbelievable. The professor who was trying to organise it for me couldn’t believe it.”

Dr Pinion said she believes her chances were wrecked in part because Dr X has “ influential friends”, including within Scottish Governmentranks, and because NHS HR departments “collude”.

Eventually, Dr Pinion paid to go to Northern Ireland instead where she did colposcopy for free and was finally revalidated by the GMC in March 2018.

Then, out of the blue, NHS Fife advertised vacancies within obstetrics and gynaecology – and Dr Pinion decided to apply. She said she wanted to “just to prove they’ve blacklisted me”.

She heard nothing and later discovered the appointments had been filled.

“They refused to tell me who was on the panel, but said I hadn’t been shortlisted because I didn’t have a licence to practise and I hadn’t worked since 2012.

“I have it in writing from the GMC that not having a licence to practise is not a valid reason not to appoint or shortlist someone, because you need to work to keep your licence.

“I watched that BBC documentary [on the Liverpool Women’s Hospital’s consultant shortage] recently and I spent the night awake, in tears, because if I had been allowed to keep up to date I could have gone there.

“I have an employment tribunal saying I have been wrongly kept from working since 2012. But because of what Fife have done to me I can’t apply for a job like that.”

A spokesman for the health board said: “NHS Fife does not comment on members of staff – past or present.”

A spokeswoman for the Scottish Government said it did not have exact figures for how many doctors in Scotland are currently suspended.

Former Health Secretary Shona Robison announced in 2017 that an Independent National Whistleblowing Officer (INWO) would be appointed to hold health boards to account, especially where a whistleblower claims to have been unfairly treated.

A spokeswoman for the Scottish Government said: “Health boards have an obligation to make sure the whistleblower is protected throughout the process and does not suffer any harm as a result of speaking up.

“We will announce the timetable for the legislation to establish the INWO in the coming weeks.”