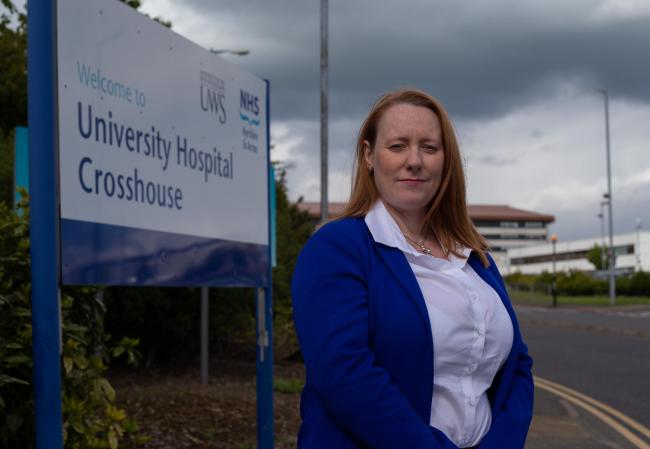 Deborah Shepherd, National Official Scotland for the Society of Radiographers

NHS Ayrshire has become the latest health board to be rocked by claims of bullying after nearly 100 radiographers lodged a formal grievance against their managers.

The backlash by staff in NHS Ayrshire and Arran’s diagnostic imaging department was sparked after a radiographer and trade union rep was threatened with disciplinary action after challenging proposed changes to CT scanning, which staff feared put patient safety at risk.

The radiographer, Fiona Ferguson, had only recently returned to work following treatment for breast cancer, but has now being signed off for “work-related stress” by her GP.

The case was described by the Society of Radiographers’ (SoR) national officer for Scotland, Deborah Shepherd, as a “final straw after years of bullying, harassment and victimisation” which she said had driven at least two employees within the department to the brink of suicide.

She said she had been personally telephoned in the past two years by two individuals on the verge of ending their lives over work pressures – one who was on the Erskine Bridge, and another who was poised to overdose on pills.

The Herald has also been told that staffing shortages have seen radiographers “making themselves ill” amid pressure to take on extra shifts.

Ms Shepherd said: “Members have for years been very reluctant to put in formal grievances, because their impression is that when they do that they get targeted and it puts themselves and their careers at risk.

“Of course, the board says ‘there can’t be a bullying and harassment problem because nobody’s putting in grievances’. The reason for that of course is that if they did, they’d be victimised.

“So for years we’ve been telling the board there’s a culture of harassment and bullying in there, and it’s been getting progressively worse.”

The collective grievance letter, signed by 85 radiographers and radiology staff from both Crosshouse and Ayr hospitals, was sent to chief executive John Burns on April 3.

It describes staff at Crosshouse feeling “intimidated, scared to speak up for fear of retribution” and complains of “a lack of consistency in the application of NHS Ayrshire and Arran’s existing grievance process which serves only to marginalise and isolate individuals from colleagues”.

They say their staff meetings are “regularly cancelled when there are major issues to be discussed”, and that meetings are either not minuted at all or the minutes “are not a true reflection of discussions”.

Certain managers in the department are said to “adopt a passive aggressive approach in all dealings with staff” and “for a long time our concerns and views have been ignored by management”.

Radiography staff from University Hospital Ayr say they are “increasingly frustrated at the micromanagement that appears to happen on a daily basis”, and by the “persistent lack of consistency in treatment of staff and a lack of compassion, particularly when personal circumstances can impact on work”.

In 2015, a ‘seek-to-understand’ exercise was undertaken by external consultants after a staff survey flagged up a bullying problem within the imaging department.

However, the SoR says recommendations were never acted upon.

The latest crisis was sparked after Ms Ferguson, 55, attended a meeting with imaging department managers on March 15 – just three weeks after she had returned to work following nine months’ sick leave for breast cancer.

SoR members were concerned that proposed changes to CT head scanning, relating to radiography staff in the emergency department, could cause delays or disruption to the treatment of patients with conditions such as head trauma or stroke.

Ms Ferguson had been asked to collate and present comments from staff, but she says she was repeatedly “shut down” and left shell shocked when the meeting was aborted amid accusations from managers that she was being “aggressive and disrespectful” – something she denies.

On March 28, Ms Ferguson was told that a grievance had been lodged against her for “inappropriate behaviour in a meeting” and that she would be transferred with immediate effect from Crosshouse to Ayr Hospital while an investigation took place.

The Crosshouse ban meant that Ms Ferguson, a radiographer at the site for 18 years, required permission to accompany her 82-year-old mother into the hospital for X-rays and CT scans after she suffered a bad fall in March.

Although the transfer was subsequently reversed following an intervention by Mr Burns, Ms Ferguson says the stress left her feeling unable to cope with her work.

“I’m just scared of making a mistake,” she said, adding that she believes the meeting on March 15 was “set up” as an excuse to get rid of her.

“Even if I hadn’t just come back from breast cancer, that’s just a horrific way to treat a human being.”

A colleague, who asked not to be named, added: “While all this has been going on in the background, we have been delivering patient care to the best of our ability and we want to work with the organisation to resolve these issues but we want them to be taken seriously.

“This undercurrent of bullying and poor management has to be removed. It’s terrible to work in an environment where you’re scared to speak up.”

Ms Shepherd added that staff are dismayed that the managers subject to the collective grievance have not yet been suspended.

She said: “Staff are not confident that these matters are being taken seriously because the managers are still in the building. They don’t believe that would happen with any other staff member.”

John Burns, chief executive at NHS Ayrshire, said the health board took “seriously” all concerns raised by staff. Mr Burns had offered to bring in independent consultants from Core Solutions, the Edinburgh-based mediation company led by John Sturrock QC, in a bid to “work collaboratively to agree the best way to understand the issues”.

This was rejected by SoR members, who considered it a delay tactic and waste of taxpayers’ money.

Mr Burns said: “This would have enabled a joint ownership, supporting NHS Ayrshire & Arran’s wish to work collaboratively with the Society.

“I personally offered to meet with staff to assure them that this co-produced process would be a formal process with clear outcomes.

“This would not remove the right for a grievance to be heard at a later date should that be a conclusion of the review.

“Having been advised by the Society of Radiographers that their members did not wish to take forward the proposal, we confirmed to the Society that the grievance will proceed in accordance with Board Policy.

“Arrangements are underway to hear the grievance.

“We recognise that this is a difficult time for all staff who are affected by this grievance.”